Avoiding the “Dance Floor of Death”

Here’s a pretty common scenario: You’ve planned a company holiday party for 250 guests at a local hotel. Following a cocktail hour, the guests are ushered into the ballroom, where they are seated for dinner. Once dinner is served, a comedian is scheduled to perform, followed by a brief year-end awards ceremony and lively dancing until the wee hours. You’ve hired the best DJ in town, someone you’ve worked with for years, and the comedian came with the highest kudos and some of the funniest video clips you’ve ever seen. The food is fantastic, the ambience is perfect, everything is going exactly as planned. Until… Until the comedian bombs.

No one’s laughing. In fact, half the room isn’t even listening. They’re talking amongst themselves, and you don’t know whether you should be angrier at the audience for their rudeness, the comic for his awful performance, or yourself for pushing an entertainer you’ve never hired before. The only thing you ARE sure of is who the client will be angry at: you. The question is, what went wrong? The comedian did the same material that you saw in the video, and the audience in the video was doubled over with laughter (and so were you!). The wait staff was finished serving, so there was no distraction there. The sound was perfect, and everyone could see and hear the show without a problem. Could this fiasco have been avoided or was it just a fluke?

“The Dance Floor of Death”

One area that requires examination is the position of the audience and the stage, in relation to the dance floor. The floorplan below is commonly utilized for dinner-dance events: 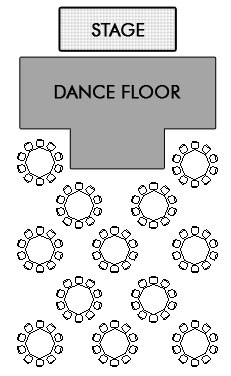 “The Dance Floor Of Death”

This may be a great layout for a dinner-dance. The dance floor is right in front of the DJ or band, and it serves as a buffer for people who would rather sit at their tables than dance. But for a comedian, magician, or any variety performer who needs to establish instant rapport with the audience, this dance floor buffer zone can zap any hopes of establishing that rapport, instantly or otherwise.

My friend, magician Jeff Rutenberg, calls this scenario “the dance floor of death” because of the devastating effect it can have on a performance.

Depending upon the size and shape of a room, and whether the stage is portable or built-in, it may be difficult or impossible to go with any room layout other than the one pictured here. Furthermore, even when a different setup is possible, many still prefer the setup in this sketch, since not placing the dance floor between the stage and the audience makes it too noisy for the non-dancers who prefer to socialize. In situations like these, I often recommend that a portable stage be placed close to the audience. 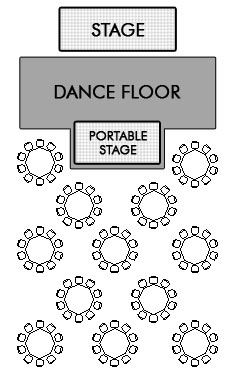 I use a stage that can be easily folded and rolled away as soon as my show is done, so that the dance floor is clear before the dancing begins. The rental cost runs in the neighborhood of $150 (including delivery) and is truly worth its weight in gold.

Over the years, I’ve discovered numerous other benefits of using a portable stage in addition to the main stage: 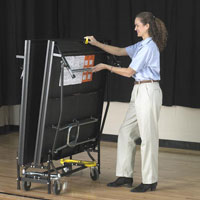 Avi is the ultimate in entertainment. He keeps the audience involved and on the edge of their seat. He is professional, entertaining, funny and just plain good at what he does. I would recommend Avi for your personal as well as your professional needs. He won’t let you down.